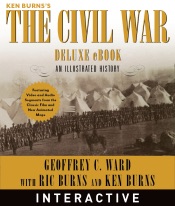 This interactive eBook has been optimized for reading on the iPad.

This deluxe interactive eBook brings the Civil War to life in a new way by combining video and audio from Ken Burns’s beloved film with interactive maps, timelines, and slideshows.

The acclaimed, best-selling companion volume to the celebrated PBS series—the highest-rated series in the history of public television—has now been enhanced to create one of the richest eBook experiences available today, and allow us to better understand and appreciate the greatest challenge our nation has ever faced.

• A new preface commemorating the 25th anniversary of the original broadcast of the PBS documentary.

• Nearly an hour of video and audio from the original film. We get wonderful footage re-creating what life was like during the war, Shelby Foote’s peerless storytelling and analysis, and informed commentary from other prominent historians.

• An interactive map that explores troop movements for major battles of the war.

• A Who’s Who of the military leadership of the Civil War to match and compare generals from each side.

• An interactive timeline of major events of the war.

• Original animated maps of the three days at Gettysburg that make it easier than ever to follow this legendary and complicated battle.

• High-resolution slideshows of hundreds of rare photographs as well as paintings, lithographs, and maps in full color.

• Pop-up essays that allow further exploration into cultural and historical subjects that affected life during wartime, including photographs and video.